The store will not work correctly in the case when cookies are disabled.

"I’ve loved Lindt since I was little and I am really proud to be a part of the Lindt family.” – Roger Federer

Both Federer and our Lindt Maître Chocolatiers exemplify Swiss excellence, passion, quality and dedication – whether that’s on the court or in the kitchen. We’re proud to have our iconic Swiss creations associated with such an iconic Swiss personality. Roger Federer’s incredible charisma boosted the global awareness and popularity of the Lindt brand, making the long-standing partnership a success story for both sides. 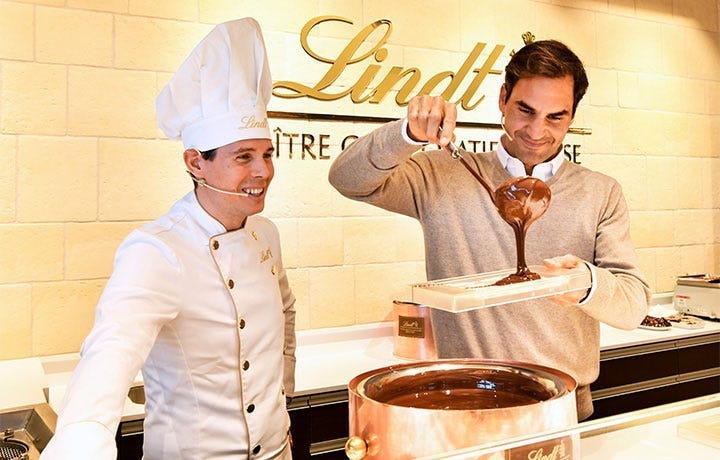 Just like us, Roger Federer pursues perfection in everything that he does. It’s this attitude that made him one of the most successful tennis players of all time – and one of the greatest ambassadors. Since he started representing Lindt & Sprüngli, Federer has ceremoniously opened a number of our Lindt Chocolate shops around the world – from the Chocolateria at our headquarters in Kilchberg to the largest Lindt boutique in the heart of Paris and the Lindt Chocolate Heaven on the Jungfraujoch. More on that below!

On 14 July 2014, Roger Federer and American ski racer Lindsey Vonn went head to head 3,454 metres above sea level. The match officially inaugurated the Lindt Swiss Chocolate Heaven on the Jungfraujoch, the highest Lindt Chocolate Shop in the world. Curious to see who won? 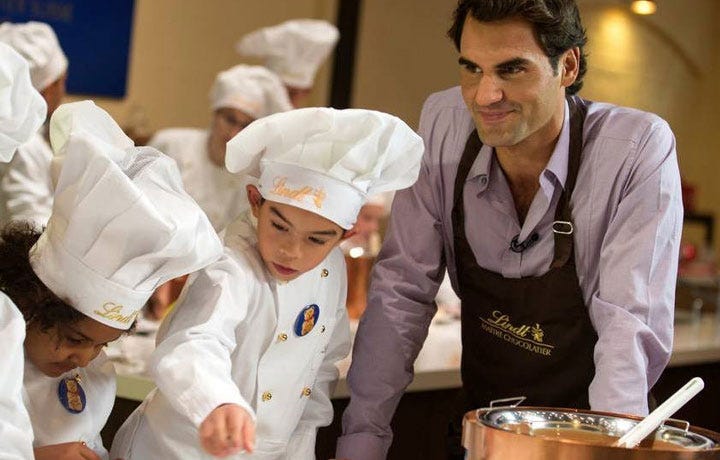 The essence of chocolate is joy. Over the years, Roger Federer has helped us to convey that message and support the less fortunate through the organization of charitable projects in Switzerland and Africa.

In 2010, Roger Federer participated in ‘Match for Africa’, with Rafael Nadal in Zurich, Switzerland. And 2014 saw him play Stan Wawrinka in the second of these charitable matches. Roger Federer is also involved with the Winterhilfe Schweiz empowerment fund, which invites children from disadvantaged families to participate in fun activities. As part of this program, Roger Federer welcomed children to an unparalleled chocolate event at Kilchberg’s Chocolateria in 2013, and in 2018 helped arrange a special performance by the Swiss National Circus Knie. Both events were a standout success!

Lighting up the world

Roger Federer’s energy and enthusiasm light up all his endeavours. This was particularly true in 2010 when he was involved in the terrific light show at our chocolate factory in Kilchberg, Switzerland. When Roger Federer ceremoniously flipped the switch with Lindt CEO and Chairman Ernst Tanner, fabulous winter projections by Gerry Hofstetter lit up the outside of our headquarters, delighting over 8,000 visitors.

This dazzling event also featured a children’s carousel and a Santa Claus, inviting children to sit on his lap and tell him their wishes. Before heading home, each child could put their Lindt chocolate wish list into a box. Five lucky winners were then chosen every weekend over the course of the advent. 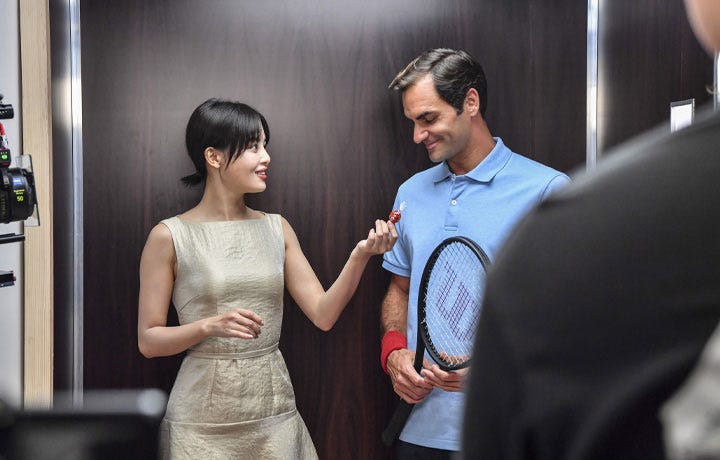 In 2019, a Lindt campaign developed in cooperation with the popular Chinese actress Xin Zhilei became a social media sensation – garnering over 90 million clicks in next to no time.

Every year since 2015, Lindt & Sprüngli organizes a meet-and-greet with Roger Federer at the Lindt headquarters in Switzerland. The special day includes chocolate-themed activities and experiences.

On 21 October 2015, Lindt & Sprüngli invited 29 lucky winners from 7 different countries around the world to meet Roger Federer at the headquarters in Switzerland. After a day exploring Zurich’s old town, our guests were invited to create their own tablets while chatting with Roger.

The event grows! On 21 November 2016, we invited 75 winners from 12 countries to come to Kilchberg and meet Roger Federer. After learning about Lindt and crafting their own creations with Roger Federer, our winners were invited for one last dinner – of course, including a delicious Lindt dessert.

In 2017, we expanded our reach, inviting guests from 13 different countries for a fun chocolate-filled day with Roger Federer at our headquarters.

The more, the merrier. 86 lucky guests from 19 different countries join us at our headquarters for a unique encounter with Roger Federer and a full day of chocolate experiences guided by the Lindt Maîtres Chocolatiers.

In 2019, 68 lucky winners coming from 16 different countries enjoyed a unique encounter with Roger Federer, as well as tasty experiences and experiments.

"My hands are shaking"


See how Roger Federer feels about meeting his fans from all around the world – and how they feel about meeting the Swiss tennis star at Lindt.